The winner composition, ENCHANTED ALBION,  will be performed in World Première during the Pittaluga competition finals next 25th September 2021. The performer will be IRINA KULIKOVA, First Prize winner at the 2008 Pittaluga Int. Competition. 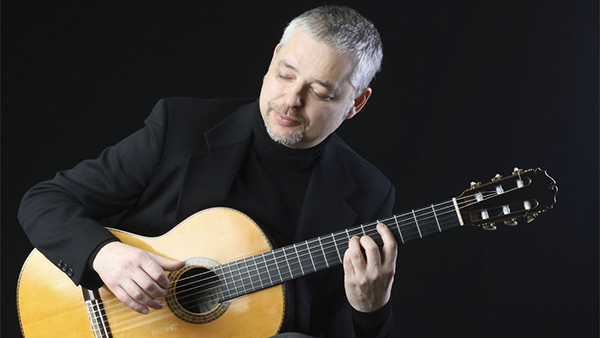 Frédéric Zigante has gained a leading position among the guitarist figures who have established themselves in the last thirty years for international attention, for a multifaceted activity that combines research, concertism, recording and teaching commitment, far from places common attributed to the guitar. Born in France, grew up in Turin, he trained with Alirio Diaz, Alexandre Lagoya and Ruggero Chiesa, graduating from the Milan Conservatory. He started an international concert activity at a very young age (Great Britain, Hungary, Greece, Spain, Germany, France, Switzerland, Japan, Holland, China, Poland, Singapore, apart from Italy) which led him to perform in venues such as Suntory Tokyo Hall and the Concertgebouw in Amsterdam. To an intense recording activity (for the labels Frequenz, Arts, Stradivarius, Brilliant, Adda and Naxos) he joined the radio recordings, for broadcasters such as the BBC, Radio France, Radio Suisse Romande, Rundfunk der DDR and Rai. His interpretations and researches have stimulated the interest of numerous international trade magazines (Classical guitar, England - Guitar Review, Usa - Gitarre & Laute, Germany - Gendai Guitar, Japan - Il Fronimo and GuitArt, Italy) who have dedicated extensive services and numerous covers. He specialized in the repertoire of the early nineteenth century, performing research on performance practice and style, which resulted in numerous studies and articles, as well as recordings of the complete solo guitar by Paganini, by Mauro Rossiani's Le Rossiniane, and works for voice and guitar by Ludwig Spohr (with the mezzo-soprano Lucia Rizzi) and unpublished works by Napoléon Coste; and precisely for this commitment it received awards such as the award of the First Italian Guitar Conference (1996) for the best recording of the year. No less lively is the interest in the development of the twentieth century guitar, with first absolute performances (Donatoni's Marches II, Concerto for guitar and orchestra by Boris Asafiev) and first Italian performances (Martin's Poèmes de la mort, Leo Brouwer's Hika, Electric conterpoint by Steve Reich). He was responsible for the rediscovery of the Concertino pour guitare et orchestras by Alexandre Tansman, who played the world premiere in Gdansk in 1995 and then took care of the first recording. He also recorded the complete works of guitar for Villa Lobos, Joaquín Turina and Federico Mompou, paying close attention to manuscripts for the first time. In maturity he intensified his musicological and editorial research activity by publishing for the most important publishers: Ricordi, Schott, Max Eschig, Berbèn and Suvini Zerboni. In 2006 he was commissioned by the publisher Durand / Eschig to edit the critical edition of Heitor Villa-Lobos' guitar works. In 2016 the first volume of the critical edition of the works for guitar by Alexandre Tansman will be published. Also with Max Eschig he is responsible for the series The best of and the Guitar Library. He is the curator for the Berbèn of the Collection Ida Presti-Alexandre Lagoya. Alongside his concert and musicological activities, he also teaches at the Conservatory of Alessandria, as well as holding seminars in international locations (Switzerland, Spain, China, Japan, Italy).